New Orleans: Outpost for an Empire 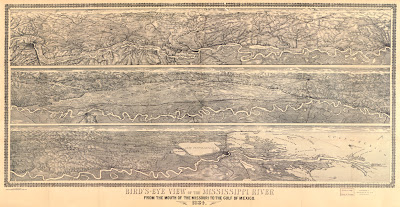 [a bird's eye view of the Land-Making Machine in 1884, from the delta up to the Missouri]

[USACE engineer schematic of the Bonnet Carre spillway, north of Louisiana; the spillway functions as a flood release valve, siphoning floodwaters from the river and putting it into Lake Pontchartrain on the backside of New Orleans]

Many of you have probably heard of the flooding on the Mississippi this spring.  It is a captivating story of devastation and beauty and is tragic every time it happens.  Being removed from the situation, we here are fascinated by the actions taken both by large scale bureaucracies- the Army Corps of Engineers- and local homeowners, families, and communities.  For folks interested in some good writing about floods, we recommend heading over to mammoth and checking out their recent installments as well as the links they provide.
Here at FASLANYC we wanted to zero in a bit on the city of New Orleans as a follow up to our recent post on the land-making machine and the Louisiana delta.  Last year we looked at some of the hydrological infrastructures supporting the contemporary city and speculated that goatherds might be used in the vegetated spaces of the city as an alternative maintenance practice, with the little bearded munchers roaming the fecund vacancies of the delta, destroying weeds and engineering little ecosystems.  Of course, the delta is not their original habitat, and if they had the misfortune to be in the Bonnet Carré Spillway when it was opened to ease pressure on the New Orleans river levee they would have been swept away as they were back in the 1940’s.
Historically, urbanization at the site of New Orleans has occurred during four different empires- Mississippian, Spanish, French, American- and was always more an imperial commercial and military outpost than a population center.  Each imperial regime imposed different techniques and practices for living in the shifting, volatile geology of the region.  The French and Spanish, beginning with DeSoto’s ill-fated expedition and Bienville's dilemma, focused on mapping the delta and its network of lagoons, channels, islands, swamps, and forests.  The result was the construction of a strategic geography for trade and military purposes.  And though the maps belied a certain bias towards relative stasis- a wildly inappropriate assumption in the delta- they enabled a series of settlements, battlements, and canals for transportation and drainage.  The city was important but small with a heterogeneous population of 8,212 including French, Creoles, Spaniards, Cubans, Mexicans, Acadians, Anglo-Americans, British, Haitians, and Canary Islanders in addition to free blacks and slaves [for whom there is less specific information].
The advent of the American Empire [defined by the creation of the frontier concept] with the concurrent adoption of the steamship and the navigation canal boom of the 1820’s-1850’s changed things, and New Orleans began to be remade into a population center.  This came to fruition nearly a century later with the invention of the Wood Screw Pump and the implementation of flood control systems by the US Army Corps of Engineers up and down the mighty Land-Making Machine.
But what about that fourth empire?  How did they live?  Little of their legacy is now legible; we have the fantastical Mardi Gras Indian tradition and the names of a few geographic entities (including “Mississippi”).  But in light of the flooding of the river, what most interests us most about this empire are their mounds. 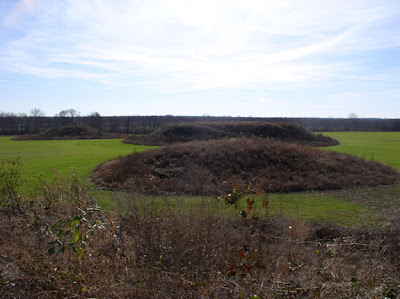 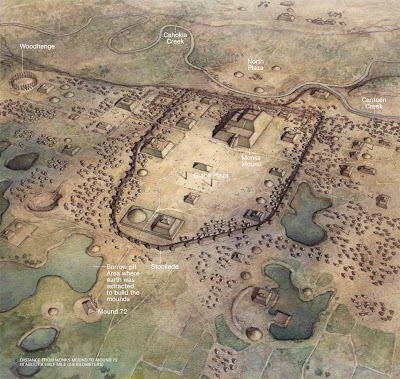 [an artist's rendition of the Imperial capital of Cahokia; the city may have supported a population of 15,000, connected to surrounding urban sites with specialized economies]
The Mississippians were a “mound-building people”, a fragmented and fractious empire loosely associated and bound together through cultural practices, trade, and their shared environmental situation.  The capital was Cahokia- at the time the largest North American city north of Mexico- and is a prime example of this cultural practice of mound-building.  While the archeological mounds are laden with cultural significance [and this is what anthropologists tend to focus on it seems], these constructions can also be seen as a dispersed, cellular adaptation to the dynamic hydrological condition of the Mississippi Valley.
We find it interesting that even in this year’s record high flood, the indian mounds near Kincaid, Illinois stayed dry.  Trawling through the wildlife and game message boards [H. Willis does a lot of hunting and fishing], we came across this great thread where hunters are discussing the animals that have taken refuge on the local indian mounds, as well as the roofs of homes.  This activity is not limited just to animals.  In a 1927 issue of Science in an article titled “Indian Mounds as Flood Refuges” we read:
The thousands of terror-stricken people who have taken to Indian mounds to escape the flooding Mississippi waters are showing scientists how the Indians probably used these earthworks which they built in pre-Columbian days.
And later...
“The buildings [on top of the mounds] were probably temples, altars and the habitats of chieftains,” said [anthropologist] Dr. Kidder.  “In time of flood a mound could accommodate the entire tribe, most of the members of which probably lived in the inundated area.”
Pyramidal in structure, but with a flat top to permit erection of buildings, the mounds are about 150 feet in diameter and some fifty feet high.  They are largely confined to the flood area of the Mississippi.
This practice of mound-building varied across the empire, from a few small hills near Kincaid to the imperial complex of Cahokia to the shell middens of the Louisiana Delta.  It happened at a regional landscape scale- across the entire Midwest and much of the Southeast.  And the mounds were not just burial sites, giant cosmological clocks, or the temple of the high priest; they were a multifunctional networked infrastructure- the construction of the territory as an articulated surface for resisting periodic inundation.
Formally these mounds and their function are reminiscent of the incredible constructions created by homeowners this spring to try and save their own homes as levees up and down the Mississippi were breached or blown, spillways were opened, and the Mississippi River reclaimed its floodplain for a time.  Along with the tragic losses, inspiring stories abound of families and small communities collecting bobcats and sand bags and performing what we might call a “series of tactical operations” to try and save a house. 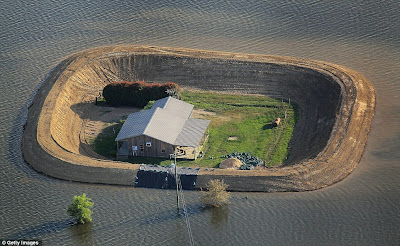 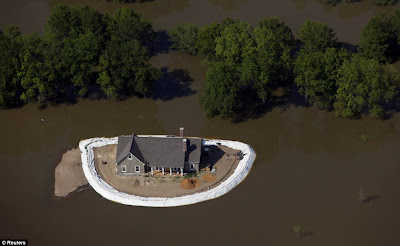 In considering the city of New Orleans, we are interested in how this concept might be applied during the next generation.  The draining and settling of the back swamp between the Mississippi River levee and Lake Pontchartrain first enabled the city to become the population center that we now know.  Rather than full-scale retreat, which seems untenable for a variety of social, economic, and environmental reasons, perhaps a new landscape theory drawing on the lessons from earlier infrastructural regimes could be developed to reconstruct the city as a hybrid of imperial outpost and population center that is able to resist inundation.
Taking a lesson from the Mississipians of 1000 years ago and the Medellin architects of now, and utilizing the resourcefulness of people and animals resisting the flood of 2011, we could imagine a site in each neighborhood of the low part of New Orleans- the church, the park, the school- being raised above flood level, with individual homeowners encouraged to acquire a small boat and to raise their own sites if they choose.  A timber source for piles and a sediment source for fill would have to be identified, and new cultural practices instigated.  But the result within a generation could be the construction of the city itself as an articulated surface. 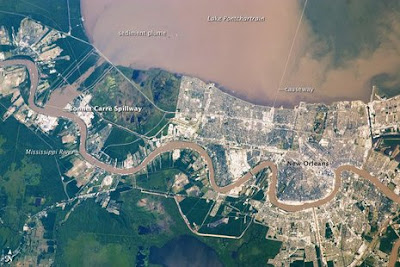 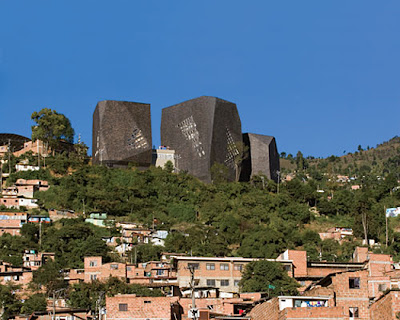 [the Parque Biblioteca Espana, in Medellin, Colombia, one of five different libraries with adjacent parks constructed in different, strategic barrios throughout the city]
Posted by Brian Davis at 7:55 PM