The notion of small, tactical interventions with long-range, large-scale ramifications is one of our favorite themes here at FASLANYC, and projects with this focus figured prominently in the inaugural Waits Awards this past July.


Well, right on cue the Princeton Architectural Press published Small Scale:  Creative Solutions for Better City Living (the title may or may not have been lifted from a Better Homes and Gardens Back Issue).  So it was with great excitement that we placed it in the wicker basket in the bathroom and began an in-depth reading over the next week. 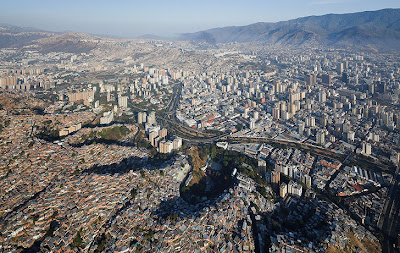 The choice of cover image for the book- a zoomed in aerial view of the High Line- is highly dubious.  What exactly does this say about small scale projects?  That they are incredibly expensive, exclusive, and high maintenance?  That they are beautiful?  They are a continuation of the decades-long effort to photoshop of our industrial heritage into a spectacular yuppie playpen where everything is pretty and prosaic?  Well, yes.  But let's keep moving.


The format of the book is also questionable.  It is a conventionally sized, bound, and printed architectural publication with each project getting a couple of pages- a superficial summary and several images.  It is literally perfect for bathroom reading, and for that we are thankful.  However, as it is also priced like a conventional architectural book ($34.95) it is a bit expensive for the 'reading room'.  More importantly, being a publication focusing on "small scale" projects, it is a missed opportunity.  The notion of a publication of 'small scale' urban intervention begs to be published as a series of newspaper inserts that can be wheat-pasted around town or assembled cookbook-style in a three ring binder, or perhaps as downloadable pdfs from an on-line wiki that gives actual details instead of superficial commentary?  It should be somehow open-source, downloadable, cheap, and mutable. 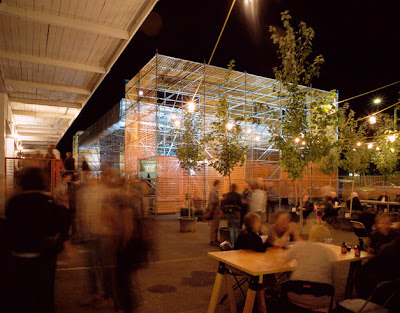 [the delightful Temporary Event Complex by Boora in Portland, Oregon; erected from scaffolding and construction fencing, the installation transforms an asphalt parking lot, image from Boora]

The conventional format is not necessarily indicative of the content, however.  The majority (51%) of the projects are interesting, and as such the book serves as a nice little catalogue of contemporary projects.  But the editors seem to have caved to some mysterious outside pressure to include high profile projects through any means necessary, and so in addition to the High Line, we also have the Marsupial Bridge, EOM's Art Tower, and SHoP's Mitchell Park proclaimed as 'small scale'.  Confused, we went to the introduction to see how small scale is defined:


"Urban interventions address the increasing density and limited availability of land in cities by identifying and using leftover urban spaces or voids or unrecognized tears in the city fabric.  They are eminently achievable:  they do not require years of permitting and government oversight, and they are not prohibitively expensive.  These little architectural insertions do not require tremendous use of natural resources or whole-scale demolition of existing fabric, and suggest solutions to the larger problem of energy consumption."


Alright.  That's enough.  It goes on, and its very fine, but the inclusion of the above projects under the professed banner of 'small scale' is nothing more than a political move to curry favor with influential designers and perhaps snag a few extra buyers.  It is, however, tactically savvy, much like a "small scale urban intervention".


But there are many highlights:  playful interventions, historical geography writ-large, altruistic efforts, clever metaphors, and ephemeral installations.  The diversity of projects and practitioners experimenting with new typologies is exciting and though lacking in specificity, it doesn't claim to be a handbook.  Each project write-up address to the client's role and relationship to the designer as well as the input of users.  Funding for projects is never more than alluded to, neither is the permitting process discussed.  Also, the technocratic and bureaucratic limitations are alluded to at best, a terrible oversight given the subject matter and the stated interests of the book in the above quoted introduction. 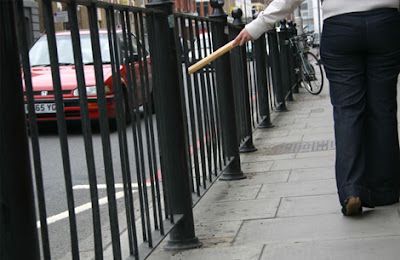 ["railings" by greyworld was installed in London and Paris, guerilla-style, sans permits; the railings are tuned to play "the Girl from Ipanema" when you run a stick along them.  seriously]

On a related note, the MoMA recently followed suit and opened its show titled "Small Scale, Big Change:  Architectures of Social Engagement" featuring several interesting projects from across the globe.  The show features one of DRDLM's favorites (though one of his less interesting works in our opinion) as well as the housing project highlighted by mammoth in their excellent "best architecture of the decade" piece.


You can find a good critique of the show over on Places Journal so we won't do that here.  However, one question does come to mind:  how do you define 'small scale?  In Small Scale:  Interventions for Urban Living, the working definition of a small scale project seems to just be "anything that is not huge."  The MoMA show is curated much more carefully and though economic, temporal and spatial scales all vary widely, it is clear that for them 'small scale' is defined as the relationship between the investments and the evolving results of the project, a difficult criteria to quantify or even qualify, but no matter.  The major shortcoming of these projects is that they are limited to those funded by governments and philanthropic organizations, leading Ourosuoff to conclude in his summary of the show that "even if the architectural conscious is evolving, it will take more than architects for that to matter". 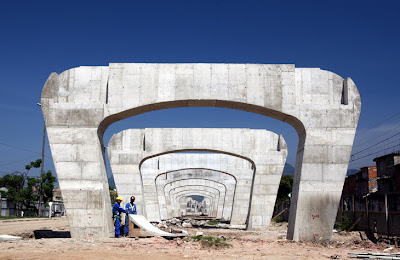 [small scale?  The "complexo do manguinhos" in Rio is featured in the MoMA's current exhibition]

This statement is both obvious and oblivious, seemingly absolving the designers he usually touts, as well as those appended to the Small Scale publication while offering no real criticism or insight.  The fact is, designers working in the free market aren't beholden to the 'greater good' any more than anyone else is.  Except where we claim that mantel.  And we have a long, illustrious history of doing just that.  But there are a number of designers, and others, who are working to wiggle around the limitations of philanthropic and governmental funding, including some of those in the MoMA show.  It is too bad that piece of the discussion is left out, because it is and will continue to be the most interesting aspect in the future. 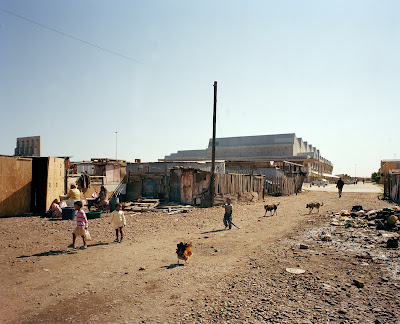 [the "red location museum of struggle" in Port Elizabeth, South Africa, completed in 2005 looms over the nearby neighborhood]

At any rate, "small-scale" may or may not be the best way to characterize this type of work.  We think not, preferring instead to think of these interventions as jams/hacks, accelerated/decelerated landscapes, lo-fi interventions, and research-based practice (which is explicitly what Jauregui's practice is).  But the definition is useful, and both the show and the book are worth checking out if you get the chance.  Please drop us a line and let us know your thoughts.  We recommend the bathroom by the cafe in the MoMA for maximum osmotic effect.
Posted by Brian Davis at 3:28 PM