This post wraps up our reporting on the Gowanus Canal, the Canal Conservancy, and the Canal Nest Colony.  By no means exhaustive, we encourage you to get in touch with us here, or go straight to any of the sources should you want to know more or simply verify the dubious provenance of some of our facts.  For our earlier posts on the subject see Part 1, 2, and 3.


The future of the Canal Nest Colony must be seen in the context of the other initiatives birthed along the Gowanus Canal in recent years.  In addition to the left over industrial uses- scrap yards, bus repair shops, concrete plants, and warehouses- the 00’s saw a wealth of endeavors by idiosyncratic communities emphasizing experimentation and education, labor, and hedonism.  In addition to the Canal Nest Colony, the Dredgers, the Oyster Farm, the Dumpster Pools, the Gowanus was also the site of the Spongepark Study and the Oyster-tecture Proposal and was made an EPA Superfund site.  The Gowanus Canal Conservancy, perhaps the most serious of these efforts, has even begun design work for a series of EPA and DEP-funded pilot projects in the vicinity.


In its capacity to attract creative/scientific agents the Gowanus Canal is a testament to the enduring ability of post-industrial wastelands to captivate the contemporary urban imagination, at least of those fortunate enough to have a bit of leisure time.  And that is a key point; livelihood is now divorced from labor, and the result is a massive portion of the population that no longer desires recreation solely in the form of repose and "healthful socializing".  While the consumption of public spaces and experiences- spectacle- is still the dominant mode of recreation, the efforts along the Gowanus Canal offer evidence that there is a desire for other types of recreation, ones that involve work.  The notion of leisure-work as a recreational activity is not a new one- hobbies have been around for a long time.  But given the repopulation of urban centers and the changes in the nature of livelihood-earning in recent decades, future public spaces should be programmed to allow people to exercise their creativity and knowledge in the form of labor, because that can be fun too.


Or not.  But it is difficult to imagine the Gowanus  Canal as a Hargreaves-esque fun park, or a Field Operations-like "lifescape".  Public spaces for leisure, mostly parks, are still being programmed according to the Olmstedian recreational paradigm (with a few tweaks to pay lip service to contemporary technology ecological issues) and this no longer completely fulfills the desires and meets the needs of the public. 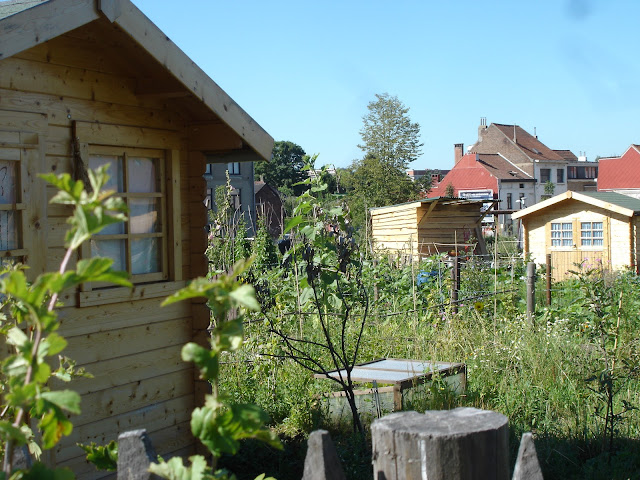 [this neighborhood park in Brussels, Belgium, offer residents a simple utility hookup and a staging ground to build a little storage facility and undertake projects.  Incorporating programming for people to undertake hobbies in this urban area where they can share resources, and work out the public/private accessibility issues of the garden seems to have created a vital and idiosyncratic urban space, as opposed to another park that has to be maintained and which no one uses]


As for the Canal Nest Colony specifically, this past week a new garden was installed at the end of Bond Street with the help of volunteers.  For the rest of the Fall, the team will be working with NYC Million Trees to get the donated trees delivered and cared for until they are installed with volunteer help in October.  Next year the composting operation will be fully functional all year, the seasonal nursery will be back, and the Chimney Swift tower that never was will be back on the docket.  New members and contributors want to try to create a floatable planter that could be anchored along the bulkhead CHUBs-style to help absorb small amounts of nitrates and petroleum.  Perhaps a study will be done of the plant communities that have colonized the banks and their horticultural and ecological value can be understood and publicized.  The energy and support of the Canal Conservancy will surely influence the direction, and the GCC will be working on related pilot-projects to retain stormwater, and new volunteers and teammates will likely contribute.


At any rate the efforts on the Gowanus, nascent though they may be, are an example of city government agencies, local organizations, and groups of interested people doing some stuff together, at no cost to anybody.  It is evidence of human agency in many forms at multiple scales in the most ghastly locations, and testing ground to do something fun.
Posted by Brian Davis at 6:51 AM